World Down Syndrome Day (21/3) adopted at the UN 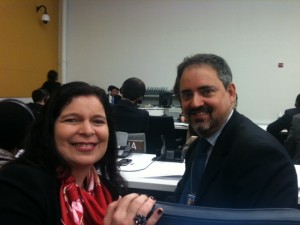 Representative of Down Syndrome International and Brazilian Federation of Down Syndrome Associations, Patricia Almeida, and the delegate of the Brazilian Mission to the UN, Counsellor João Lucas Quental during the plenary at the UN.

With co-sponsorship of 78 countries, Brazil promoted the adoption of a resolution at the UN establishing World Down Syndrome Day, March 21 (21/3). The resolution was adopted by the General Assembly on December 19, 2011, and the date will be observed in 192 member countries beginning 2012.

World Down Syndrome Day was established by Down Syndrome International in 2006, and has been observed in over 60 countries. Brazil is one of the countries that organizes the largest number of events each year to celebrate the date, and for that reason the Brazilian Federation of Down Syndrome Associations asked the support of the Brazilian government for the date to be part of the official UN calendar for international days in 2010. The date is symbolic because it refers to the three copies of chromosome 21 that characterizes Down syndrome.

The project prospered after Senator Lindbergh Farias presented a bill at the Brazilian Senate for the date to be part of the national calendar.

With renewed energy, the Mission of Brazil to the United Nations looked for other countries to be co-sponsors of the document.

On November 10, at the UN Headquarters in New York, during the plenary meeting of the Third Committee, the Brazilian proposal was read and adopted by consensus, with the co-sponsorship of 78 countries (see below).

Recalling the 2005 World Summit Outcome1 and the United Nations

Millennium Declaration,2 as well as the outcomes of the major United Nations

conferences and summits in the economic, social and related fields,

Recalling also the Convention on the Rights of Persons with Disabilities,3

according to which persons with disabilities should enjoy a full and decent life, in

conditions that ensure dignity, promote self-reliance and facilitate the person’s

fundamental freedoms on an equal basis with other persons, and by which States

awareness throughout society regarding persons with disabilities,

Aware that Down syndrome is a naturally occurring chromosomal arrangement

that has always been a part of the human condition, exists in all regions across the

and to inclusive education, as well as appropriate research, are vital to the growth

and development of the individual,

Recognizing the inherent dignity, worth and valuable contributions of persons

communities, and the importance of their individual autonomy and independence,

including the freedom to make their own choices,

1. Decides to designate 21 March as World Down Syndrome Day, to be

observed every year beginning in 2012;

2. Invites all Member States, relevant organizations of the United Nations

system and other international organizations, as well as civil society, including

non-governmental organizations and the private sector, to observe World Down

Syndrome Day in an appropriate manner, in order to raise public awareness of Down

throughout society, including at the family level, regarding persons with Down

4. Requests the Secretary-General to bring the present resolution to the

attention of all Member States and United Nations organizations.

The Committee was informed that the draft resolution contained no programme budget implications.

The representative of Iraq announced that his country is not a co-sponsor of the draft resolution.

“Assembly would decide to designate 21 March as World Down Syndrome Day, to be observed every year beginning in 2012.  Presenting the text, Brazil’s representative said it aimed to recognize the inherent worth of people with intellectual disabilities, as well as the independence and autonomy of such persons.”

“Draft resolution II on World Down Syndrome Day, approved without a vote on 10 November, would have the Assembly designate 21 March as World Down Syndrome Day, to be observed every year beginning in 2012 and invite all States, relevant organizations of the United Nations system and other international organizations, as well as civil society, to observe that Day in an appropriate manner to raise public awareness of Down syndrome.”